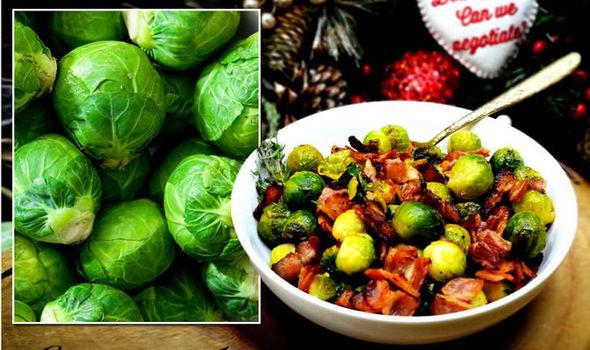 Kirsty, a home chef who runs her account LoveToCook4People, teamed up with Traeger grills. She created a recipe Britons can replicate on their grill at home.

The Brussels sprout gets its name after it was cultivated in the 13th century near Brussels, in Belgium.

However, an early version of the small cabbage vegetable was first grown in Ancient Rome.

The first written reference to the sprout was in 1587.

Over time, it has come to be associated with Christmas dinner in the UK.

They have a slightly bitter taste, making it a divisive veg.

Children, in particular, often do not like the sprout.

However, some love the flavour. Sprouts are often served boiled, although more popular recent recipes often feature frying the sprouts with bacon.

If your guests are particularly sensitive to sprouts, MasterChef winner Kenny Tutt has a tip for a milder flavour.

It all comes down to the sprouts you buy, Kenny told Express.co.uk, as he disclosed his Brussels sprouts recipe.

He said: “Buy younger sprouts if you can, as these have a much more subtle flavour.”

Kenny adds bacon lardons to his sprouts, much like Kirsty’s recipe.

However, his version also includes maple syrup and crumbled chestnuts.