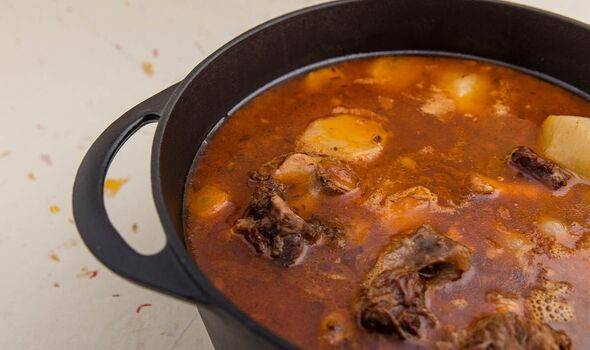 Oil has many uses in the kitchen, from greasing pans to making food turn perfectly crispy on the outside. While it is an incredibly useful ingredient, using too much of it can ruin the taste of your dish – though it can be hard to avoid when cooking with naturally fatty foods. Meat and fish are two of the worst culprits when it comes to adding extra oil to your food, and can leave a thick film on liquid-heavy dishes. However, according to food writer and celebrity chef, Nigella Lawson, all you need is a handful of ice cubes to get rid of it.

Soups, casseroles, stews and even meat-based sauces like bolognese are notorious for harbouring excess oil while cooking, and can often seem impossible to remove without wasting the food.

Using little to no extra oil when making these dishes is one way to avoid a greasy top layer, though Nigella Lawson explained that ice cubes are your best bet if you want to serve food straight away.

On her website, the TV chef said: “To remove the layer of fat that floats at the top just chuck in a few ice cubes. The fat goes cold and immediately sticks to the ice cubes.”

The ice floats on the oil because it is less dense, meaning you can easily remove them once they have gathered the grease particles.

Nigella explained that you can scoop the cubes out with a slotted spoon after a minute or two, at which point you can throw them away.

You should never dispose of oil or fat down your sink drain – even in liquid form, as it could cause a blockage when the particles solidify.

The TV chef recommended bringing your casserole, gravy, or whatever you’re making back up to heat after removing the ice cubes and serving the dish as normal.

If you have more time, there are other ways to reduce the oil content in your home-cooked dishes. Nigella said: “Of course, you could always leave it overnight in the fridge and take off the fat that way.”

Another way to use this clever hack is to fill a metal ladle with crushed ice and dip it into the oil layer.

This works best for soups and broths as the coldness of the ice causes the fat to mould into a solid form underneath the utensil without removing the non-oily parts of the dish.

Use a dipping motion to collect the liquid and take the shape of the ladle. When this happens, you can remove it from the pan and get rid of the excess grease.

To effectively remove the hard fat, you’ll need a separate bowl of cubed ice to scrap it onto.

If you are concerned about the level of oil in a pan while frying ingredients, you may be better off using a paper towel.

Simply place a paper towel on top of dry foods while cooking and use a spoon to tuck it around the edge of the pan.

Leave for a few seconds until the grease has been absorbed and dispose of it in the bin.

This method is best for bacon rashers, steak, fish, and anything else that is not covered in a sauce or stock.

It’s not just oil that ice cubes can be used for either. According to several TikTok users, these frozen items can also be used to prevent water from boiling over.

All you need to do is drop one single ice cube into a pan of boiling pasta, rice, or vegetables.

This method very quickly stops the water from bubbling higher than the pan by immediately lowering the temperature of the water in your pot.