Although simple and quick to make, salads can also be bursting with flavour and are the perfect lunchtime meal to eat in late spring or summer. This morning, James showed ITV viewers how to create a “wonderful” salad using British produce.

James Martin appears on his Saturday Morning show every week to share recipe ideas with viewers.

Today, the first meal he showed audiences how to make was a salad dish, full of fresh and colourful ingredients.

Anything can be added to salads, but James opted for eggs, different types of lettuce, asparagus, ham, watercress, and a “lovely” French dressing.

The chef decided to make soft boiled eggs and boiled them in a pan for around six minutes. 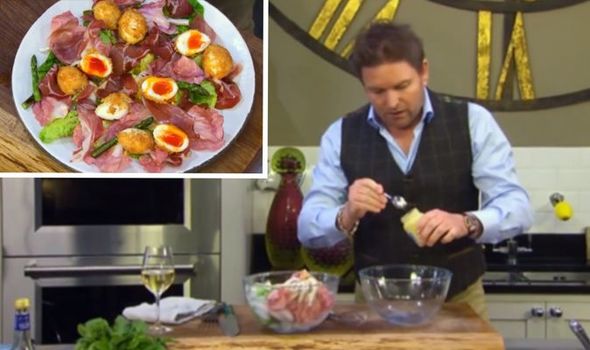 Next, James put the eggs in the deep fat fryer so that they ended up being crispy.

When cut in half, the inside of the eggs was soft and oozed yolk.

The chef then went on to concentrate on the lettuce in the salad.

He put little gem and butterhead lettuce in a bowl of “iced cold” water.

James said that this was a handy tip to “crisp up the lettuce”.

Next, the chef showed viewers how to make a “classic” French dressing to accompany the salad. 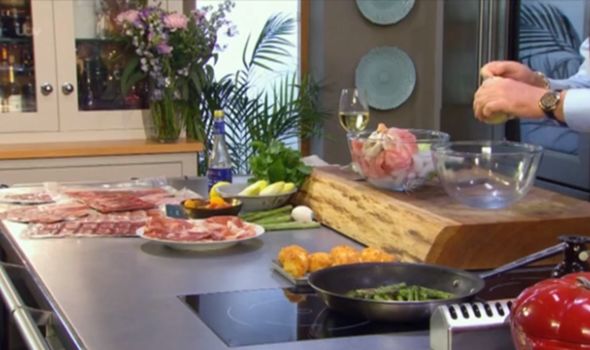 He then added a touch of cold water and mixed the ingredients together to create the dressing.

The last task to do was to present the salad on a plate.

James added cured ham to the mix, which he had bought from a local butcher.

He said: “We have phenomenal ingredients in this country.

The chef laid the ham and lettuce out on a plate, before putting the eggs on top.

“Pop watercress in last minute for a nice bit of colour,” James said.

He then topped the dish with a spoonful of the dressing.