James Martin hosts a morning cooking show on ITV every Saturday. This week, the chef showed audiences how to make roasted duck with fondant potatoes and a delicious cherry sauce.

Before beginning to cook, James showed viewers the ingredients to make a roasted duck dish.

The chef explained that he would make fondant potatoes and gravy to accompany the duck.

But first, the chef took the duck he had bought and cut the breasts off. 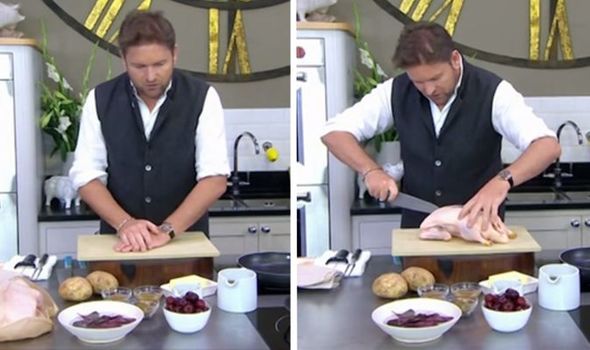 This is the part of the duck the chef explained he was going to roast.

James lightly scored the skin of the duck breasts with his knife to “get the fat out into the pan”.

The chef recommended always leaving the fat on because it adds “wonderful flavour” to the dish.

He rolled the duck in a little salt before placing the breasts in a pan to “gently infuse”.

While the duck was cooking, James turned to the potatoes.

He peeled two large potatoes and cut them into perfect circles.

Before beginning to cook the potatoes, James turned back to the duck and added cinnamon, cumin, and a little honey to the pan before putting it in the oven to roast for eight minutes.

Next, he added a little butter and oil to another pan, before placing the sliced potatoes in the pan. 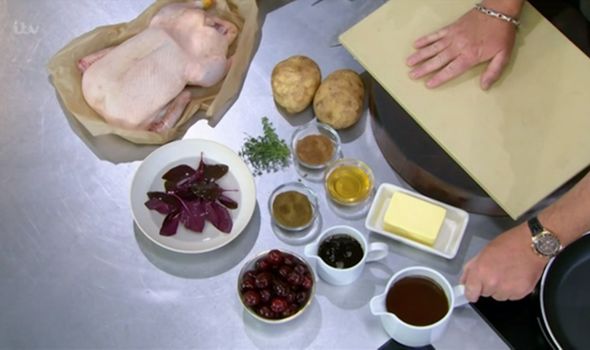 James then added a little garlic and thyme, before covering the potatoes with duck stock.

“You can use any stock depending on what [meat] you’re cooking,” James explained.

The chef then popped the pan into the oven for 25 to 30 minutes.

By this time, the duck will be ready, but James recommended leaving it to rest for a few minutes.

Meanwhile, James advised using the sauce left in the duck’s pan to make a gravy.

He added cherries to the pan, followed by a little Madeira wine, jus, butter, salt, and black pepper.

James reminded viewers to take the seeds out of the cherries before putting them into the pan.

When the potatoes had finished roasting, James said: “It’s now ready to plate.”

The chef put the potatoes on a plate and poured the gravy and cherries around them, before placing the sliced duck breasts on top of the potatoes.

James’ local pub landlord, who had joined the chef for this morning’s show, said: “Absolutely lovely.”