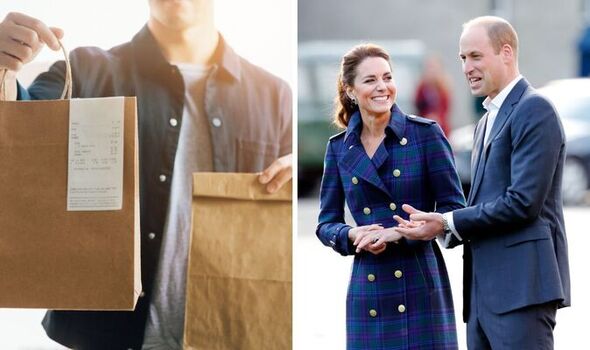 Kate Middleton and Prince William have undoubtedly been lucky enough to try some of the best cuisines in the world. However, even the royals like to kick back and have a trusty takeaway now and again.

In conversation with BBC Radio One, the Prince and Princess were previously asked about their takeaway habits.

When asked if they were “allowed to order in a takeaway”, Kate responded with “absolutely”.

Prince William even joked that ordering the odd takeaway is actually “very important”.

But what is the royals’ favourite takeout on evenings when they fancy a chilled out, kitchen-free night in?

Quizzed on whether they’d opt for a pizza or Chinese food, Kate exclaimed straight away that they enjoy a “curry”.

William added: “It’s a real conundrum when it comes to it, pizza, curry or Chinese.”

But the Prince admitted that there’s one thing about his wife’s favourite dish that he still struggles with.

He told the radio show: “Yeah, I’m not so good with the spicy food though. I’m not good at spice.”

But unsurprisingly, getting a takeaway when you’re the Prince and Princess of Wales is not as easy as regular folk ordering in.

William revealed that takeaways “do not usually get ordered to the Palace”. Rather, it is picked up from the restaurant, but “not by ourselves”.

Speaking on That Peter Crouch Podcast a few years later, William revisited his love of curry – but dislike of spice.

The royal sweetly provided a takeaway from Peter Crouch’s local Indian restaurant for the group to tuck in to.

He brought in a plate of poppadoms and curry out for his guests at Kensington Palace.

Responding to Peter’s joke that this restaurant would never have delivered to the Palace before, the Prince joked that “there’s an Uber driver on the floor at the moment being frisked”.

He also added that a 10 percent discount code had even been left should the royals be tempted by a curry.

The future King revealed that he loves a chicken masala as it has a “bit of flavour”.

But he touched on his intolerance to spice as well: “I’m not a vindaloo man, put it that way.”

In 2019, Kate reportedly told her husband: “It’s so hard cooking curry with the family, though.”

Kate and William have three children, all under 10. She continued: “The children have a portion with no spice, yours is medium.”

The Princess revealed that Charlotte can handle the heat, while Kate likes her curries “hot”.