Meghan Markle, before she married into the Royal Family, told her fans and followers that she enjoys eating pasta. The Duchess of Sussex even revealed the ingredients she uses to make her favourite sauce for zucchini pasta. The healthy-sounding pasta dish has been replicated by many royal fans and the results are certainly favourable.

Pasta is one of the few foods that members of the Royal Family do not tend to eat, as the Queen is reportedly not fond of carbohydrates.

Darren McGrady, the Queen’s chef between 1982 and 1993, previously said: “When she dines on her own, she’s very disciplined. No starch is the rule.”

The monarch’s meals are reportedly healthy, low-carbohydrate affairs, usually grilled fish or chicken with two different vegetables or a big bowl of salad.

However, pasta which is a carbohydrate happens to be one of the Duchess of Sussex’s favourite foods. 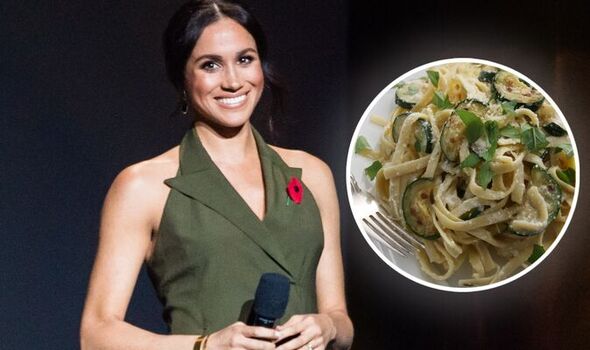 Before she married Prince Harry in 2018, Meghan often spoke of her love of different pasta dishes.

The royal is known for her healthy eating habits, so a creamy pasta sauce would not be the first recipe that springs to mind when fans think of her dinner choices.

But Meghan said she found a healthy way to make a “filthy, sexy” pasta dish, by slow-cooking courgette for four to five hours, and not using butter which is high in cholesterol.

Back in 2018, she told Delish her vegetarian version of the traditional bolognese pasta recipe, made with courgettes, was inspired by a friend.

They encouraged Meghan to wait several hours until the courgettes (or zucchini as it’s known in America) became soft enough to toss with pasta, along with a few more ingredients.

The Duchess outlined in the interview how shocked she was at the results.

“The sauce gets so creamy, you’d swear there’s tons of butter and oil in it, but it’s just zucchini, water and a little bouillon,” Meghan said.

But Meghan is not the only royal who likes to cook comfort food.

Kate Middleton admitted to making pasta with her children during a visit to Lavender Primary School. 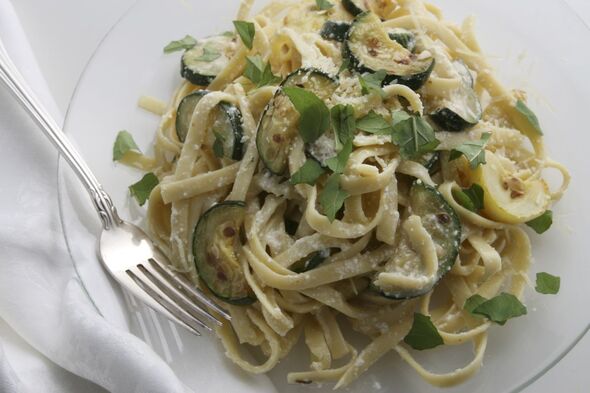 Stir in the courgette, water and bouillon cube and season to taste.

Cover the pot and cook on a low heat for four hours, stirring regularly.

The courgette should easily fall apart.

Cook the rigatoni in a separate pot with boiling water and drain before combining with the sauce.

Sprinkle with optional parmesan and enjoy.