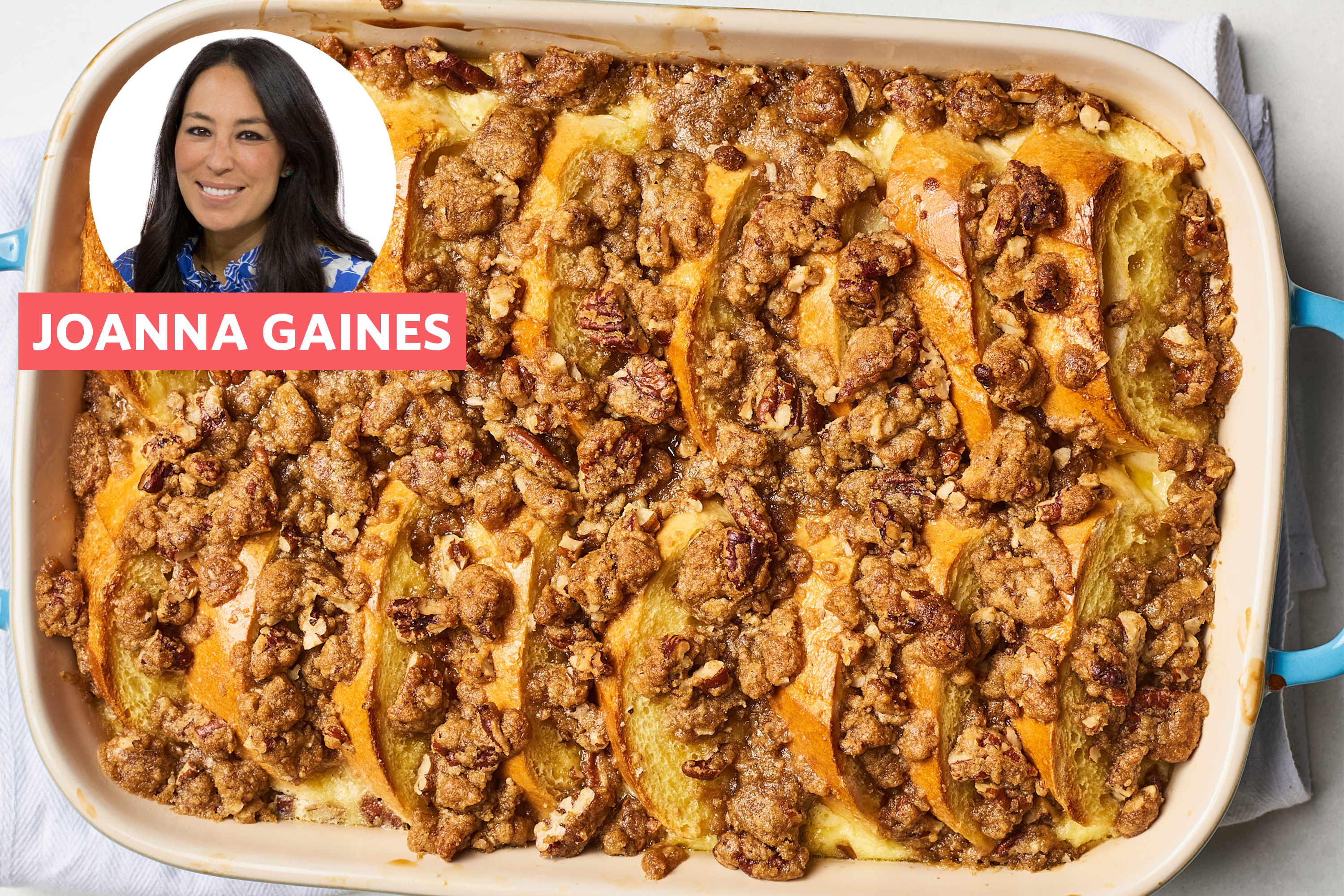 Everything’s bigger in Texas, right? So it’s no surprise that a serving of Joanna Gaines’ French toast casserole delivers thick, chewy slices of bread, sweet vanilla custard, and a candied nut topping. And as a mom of five and an author of a best-selling cookbook, I figured she has to know how to handle the early morning meal rush without losing her cool. So when it came time to taste-test four of the most popular French toast casseroles out there, I knew I wanted to test Joanna’s version with my own pajama-clad crew. 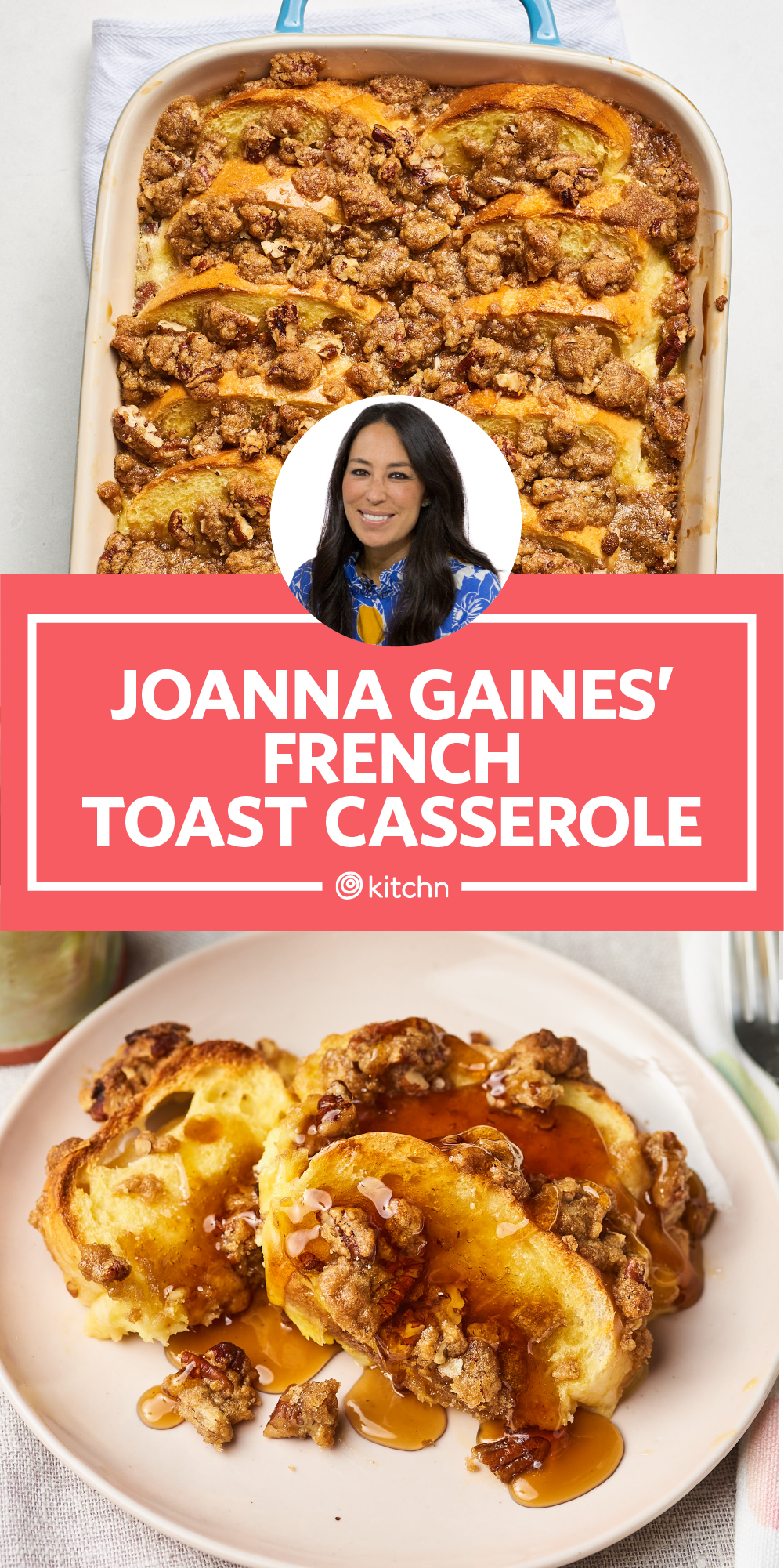 You’ll start by slicing a loaf of Italian bread into thick pieces, then stagger and overlap them into two rows in a 9×13-inch baking dish. Then make the custard: whisk 10 eggs, heavy cream, milk, granulated sugar, and vanilla extract together until smooth. Pour the custard over the bread, and refrigerate overnight. Simple!

Thirty minutes before baking, Joanna has you take the casserole out of the fridge to take the chill off. While the French toast warms, mix brown sugar, chopped pecans, flour, and salt together in a mixing bowl. Grate a stick of cold butter (Joanna calls for salted butter here, not the unsalted we usually cook with) over the sugar-and-nut mix then toss until combined. Sprinkle the topping over the custard-soaked bread.

Bake the French toast casserole uncovered in a 375°F oven for 35 to 40 minutes (mine took 45 minutes) until the bake is brown and the custard is softly set. Serve warm, dusted with powdered sugar and drizzled with maple syrup.

What I Thought of Joanna Gaines’ Overnight French Toast

Joanna’s French toast casserole has a lot going for it: thick slices of bread, a vanilla-scented custard, and a candied nut topping. Joanna calls for a deep baking dish, and although I baked in a standard 2-inch-deep dish, I had no overflow issues. Simply slicing the bread didn’t totally fill my baking dish, so I halved each slice to cover more surface area. At first, the custard pooled between the bread slices and to be honest I feared a repeat of Ina’s result. After an overnight soak, the bottom of the bread absorbed the custard, but the tops of the standing slices remained dry.

Flavor-wise, the custard was sweet but the egg flavor was definitely prominent. The topping is basically the best part — it adds a sweet and nutty crunch to the top of the casserole. (There was a lot it, though.) Grating cold butter is a technique I’ve used before for biscuits and pie dough, but it made incorporating cold butter into the nuts and sugar easy and quick, which I thought was smart. Also a plus: The sugar caramelizes on the top, reminiscent of a morning bun.

Heads up that you’ll need a serrated knife to cut servings, thanks to the chewy loaf and candied topping. All in all, though? A perfectly fine — and legitimately easy — breakfast choice with a delightfully crunchy topping. It just needs a few tweaks. 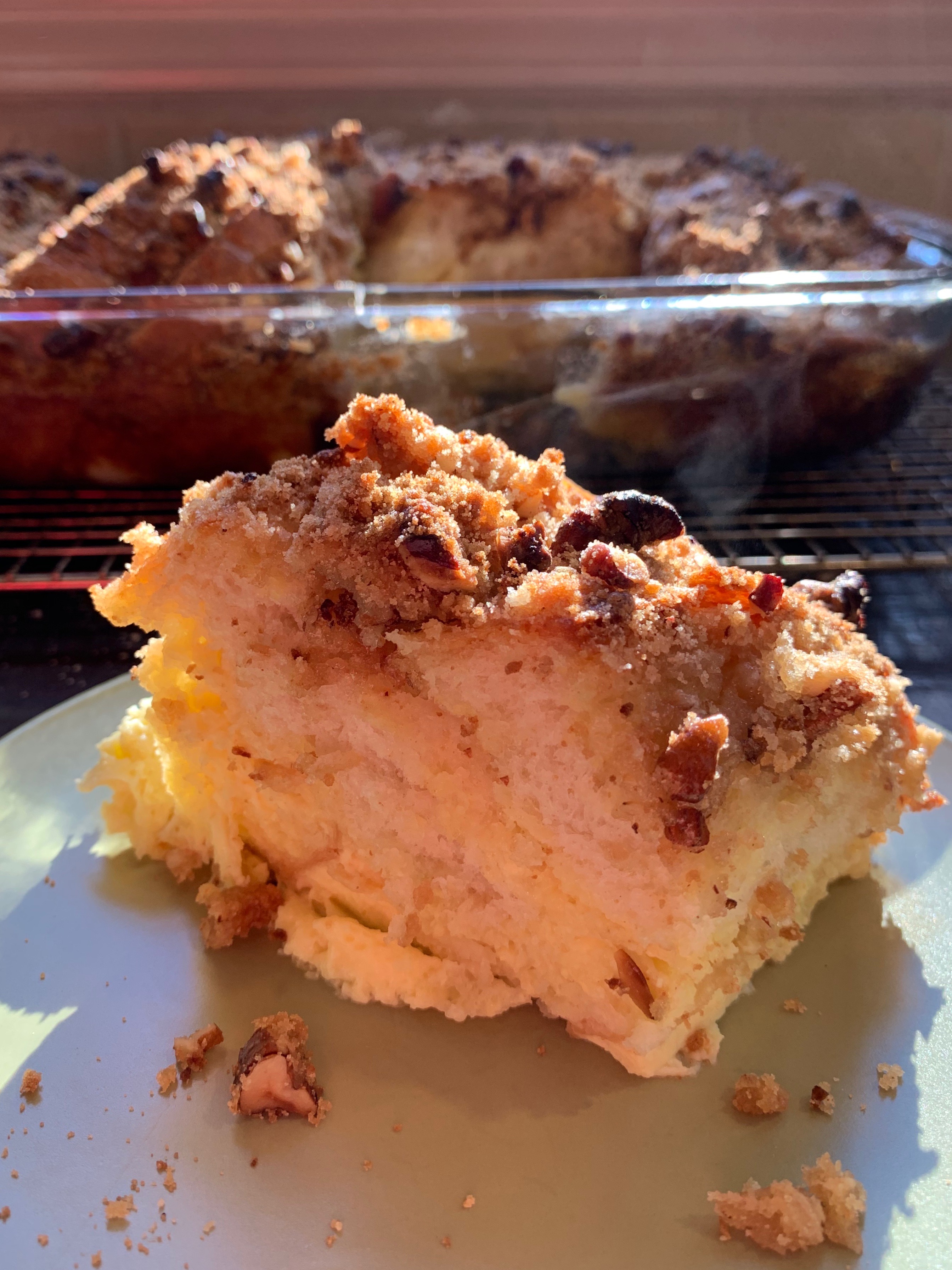 1. Use 8 eggs. The custard portion of the French toast bake tasted of too much egg rather than a balance of egg and cream. This is a simple fix; just add 8 eggs instead of 10.

2. Arrange slices at a low angle. Despite an overnight soak, some of the bread failed to absorb the custard. Instead of straight standing slices, angle the pieces of bread lower in the pan and press down once you pour in the custard.

3. Reduce the topping by half. Serve this French toast casserole and you’ve basically signed up for dessert for breakfast. It’s good, but the amount of topping the recipe makes is over-the-top, so I’d suggest simply cutting the amount in half. The French toast still benefits from the crunchy candied nut topping, just in moderation.

Joanna’s recipe delivers classic French toast flavors in sliced form with a crunchy nut topping that is a delight to wake up to. It’s easy to assemble and with a few simple changes, this sweet bread pudding should soak up even more of the vanilla custard.