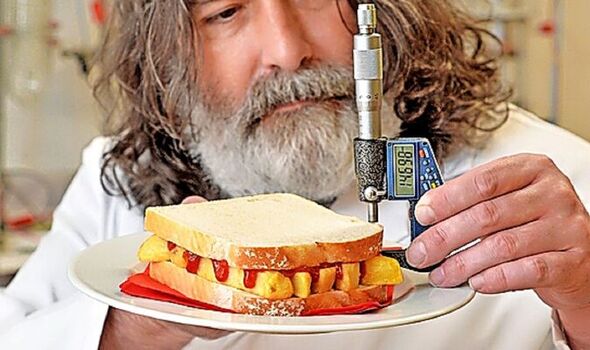 But while Britons have long laid claim to the culinary masterpiece, apparently we’ve got our proportions all wrong. According to a mathematician who has devised the scientific formula for the perfect butty, if there are too few chips they don’t melt the butter enough, ruining the taste.

For years though there has been fierce debate as to which chips are best, whether to use sliced bread or a roll, and whether ketchup or brown sauce is the correct condiment.

Now Dr James Hind, a statistician from Nottingham Trent University, has devised a precise mathematical model for its construction.

Dr Hind based his formula on the findings of a survey by supermarket Iceland, which asked 2,000 people how they create their butties.

The poll found 52 per cent prefer butties made from a sliced white loaf – 49 per cent opting for medium sliced over thick or thin.

The majority (65 per cent) insisted the bread must be buttered, rather than spread with alternatives such as margarine.

Chip selection was a much closer call – 46 per cent preferred thick cut ones from a chippy, 33 per cent favoured the oven variety and 11 per cent opted for French fries.

While condiments are generally regarded as a personal preference, ketchup was declared the best – with 49 per cent of those surveyed opting for lashings of tomato sauce, followed by mayonnaise and vinegar.

But it was while devising the butty’s perfect build that Dr Hind dealt a crushing blow to British efforts.

He claimed we use far too few chips – most people surveyed put in seven or eight – and that 12 is the “perfect number”.

The scholar said the optimum ratio of chips to bread is three-quarters.

Or in mathematical terms, C is greater than or equal to 3b/4 + k + 3m. [C is the weight of chips in grams, b is the bread’s weight, k is measured in millilitres of ketchup, and m is the mass of butter in grams] On that basis, the perfect butty consists of a layer of 12 chips, weighing 60g, between two 40g medium slices of buttered white bread.

Any less than that ratio, Dr Hind warned, there may be insufficient chips to melt the butter, which softens the bread and creates the tasty contrast to the crispiness of chips.

But he cautioned, too many chips makes the butty “awkward to eat”.

Dr Hind said: “The most important thing is to have the weight of chips at least three quarters of the weight of the bread plus ketchup.

“But every type of bread and style of chip varies subtly, so I’d encourage people to devise their own perfect formula.”

The humble chip butty is thought to have been invented in 1863 at Britain’s second-ever chippy in Lancashire. It also goes by the names “chip roll”, “chip muffin”, “chip cob”, “chip bap” and “chip barm”.

It isn’t just Dr Hind who takes a mathematical approach to the art of butty-making – 73 per cent of people quizzed believe its creation is an “exact science”.

An Iceland spokesman said: “We felt it our duty to ensure the British public know the optimum way to build their crispy potato sandwich.

“With prices starting from just £1, the chip butty is as budget friendly as it is delicious.”