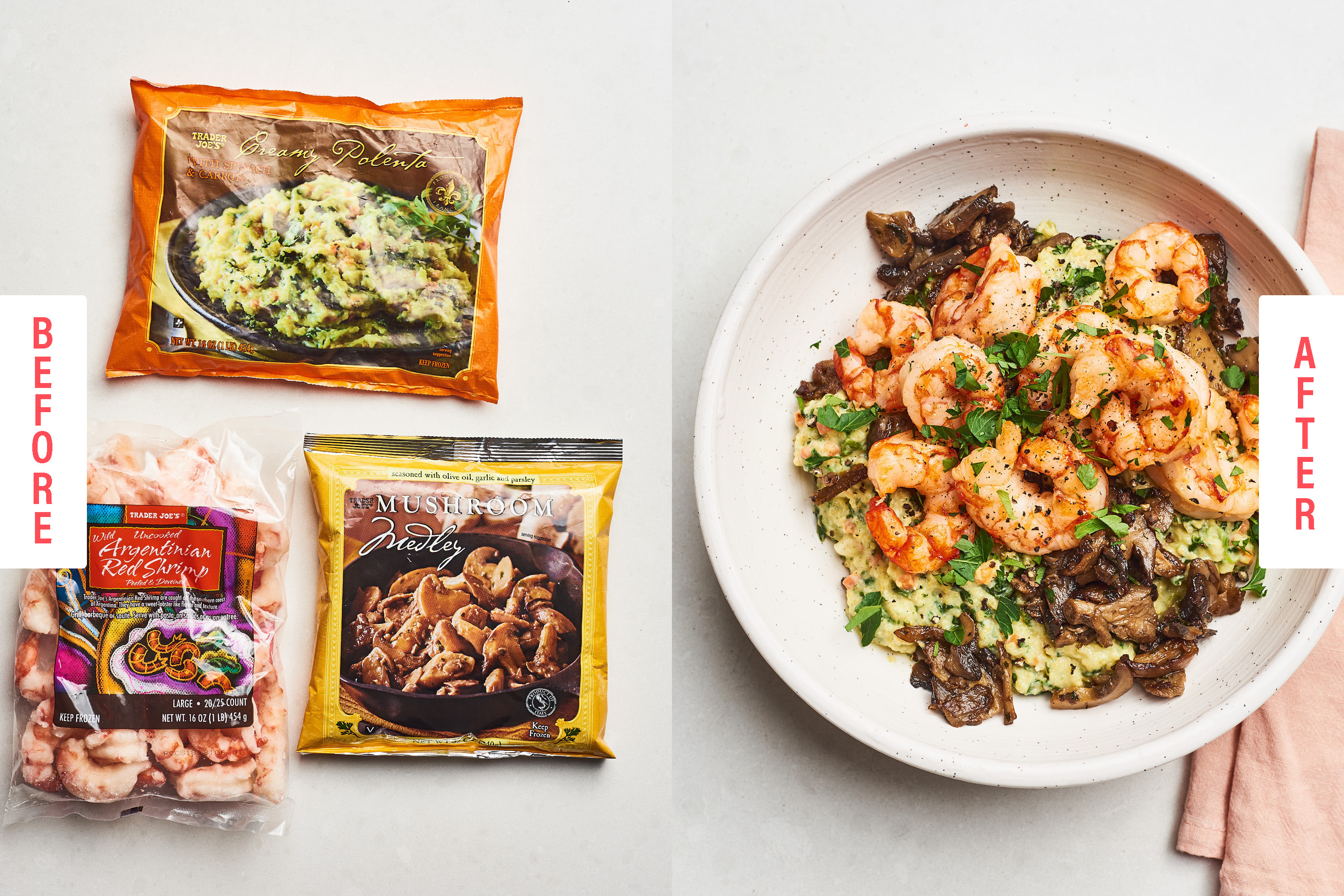 Welcome to Snapshot Cooking, the home of Kitchn’s easiest recipes. These mini recipes are so simple you can practically cook from the before-and-after snapshot itself.

For years, I rarely visited the freezer section of Trader Joe’s. I knew it was a goldmine of quick frozen dinners and appetizers, but I found the sheer quantity of options overwhelming (plus, my closest store was the busiest one in NYC). I chose to spend my time among the condiments and cheese instead.

Clearly I was in the minority in my decision, because most shoppers head straight to the freezer aisle when they hit Trader Joe’s. Once I moved closer to a less-crowded store, I joined the masses — and for the first time, discovered how easy and fun it is to build a complete meal entirely from freezer staples. No, I’m not talking about popping one of their frozen dinners in the microwave. These three-ingredient dinner ideas start with individual components, which, when joined together, create practically effortless meals that feels homemade. 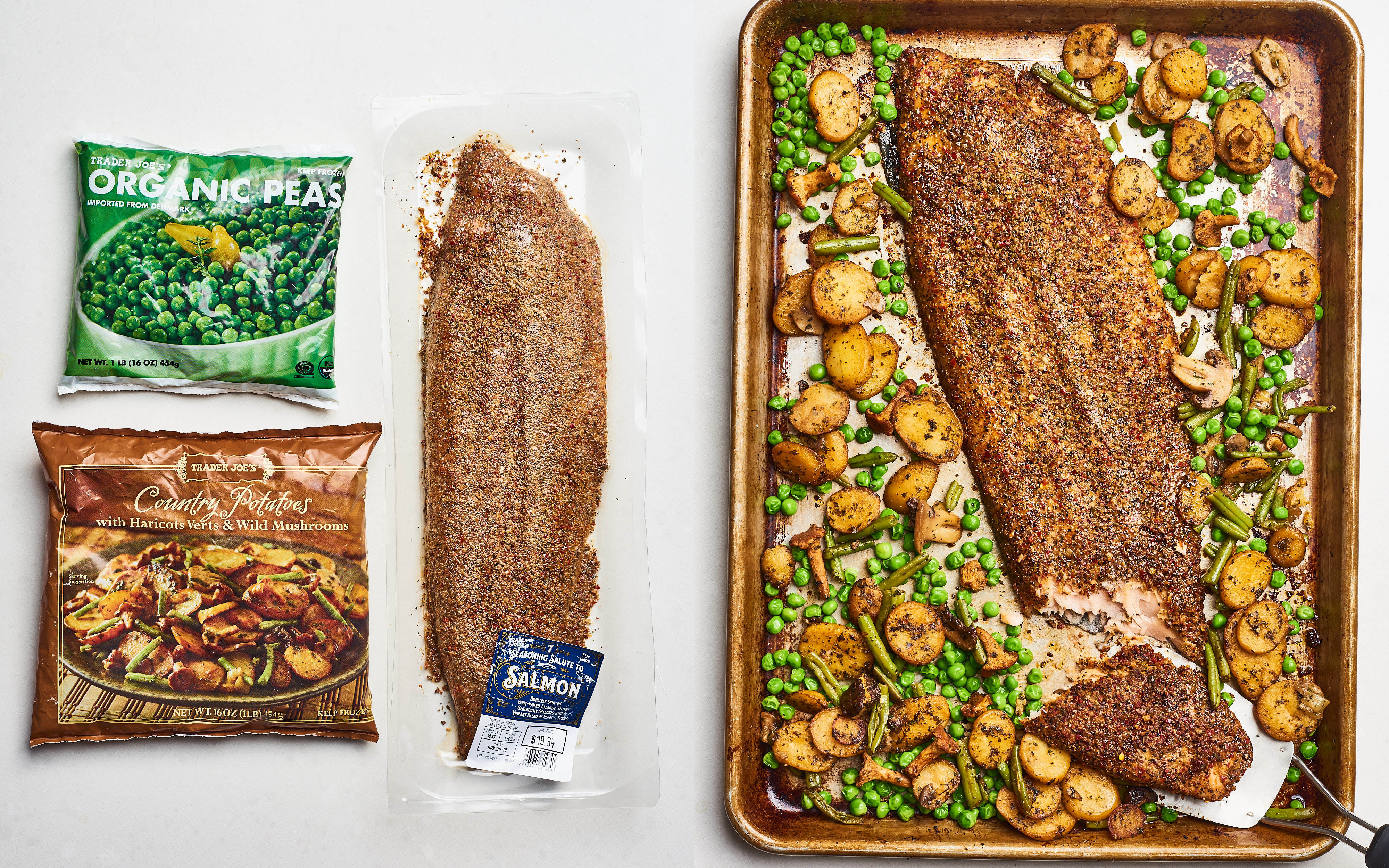 Heat oven to 450°F. Lightly grease a rimmed baking sheet with olive oil. Place 1 (roughly 1 1/2-pound) still-frozen side 7 Seasoning Salute to Salmon in the center. Roast 20 minutes. Spread 1 (16-ounce) bag Country Potatoes with Haricots Verts and 1 (16-ounce) bag Frozen Peas around salmon in an even layer; season with salt and pepper. Roast until salmon is cooked through and veggies are warm, 10 minutes. 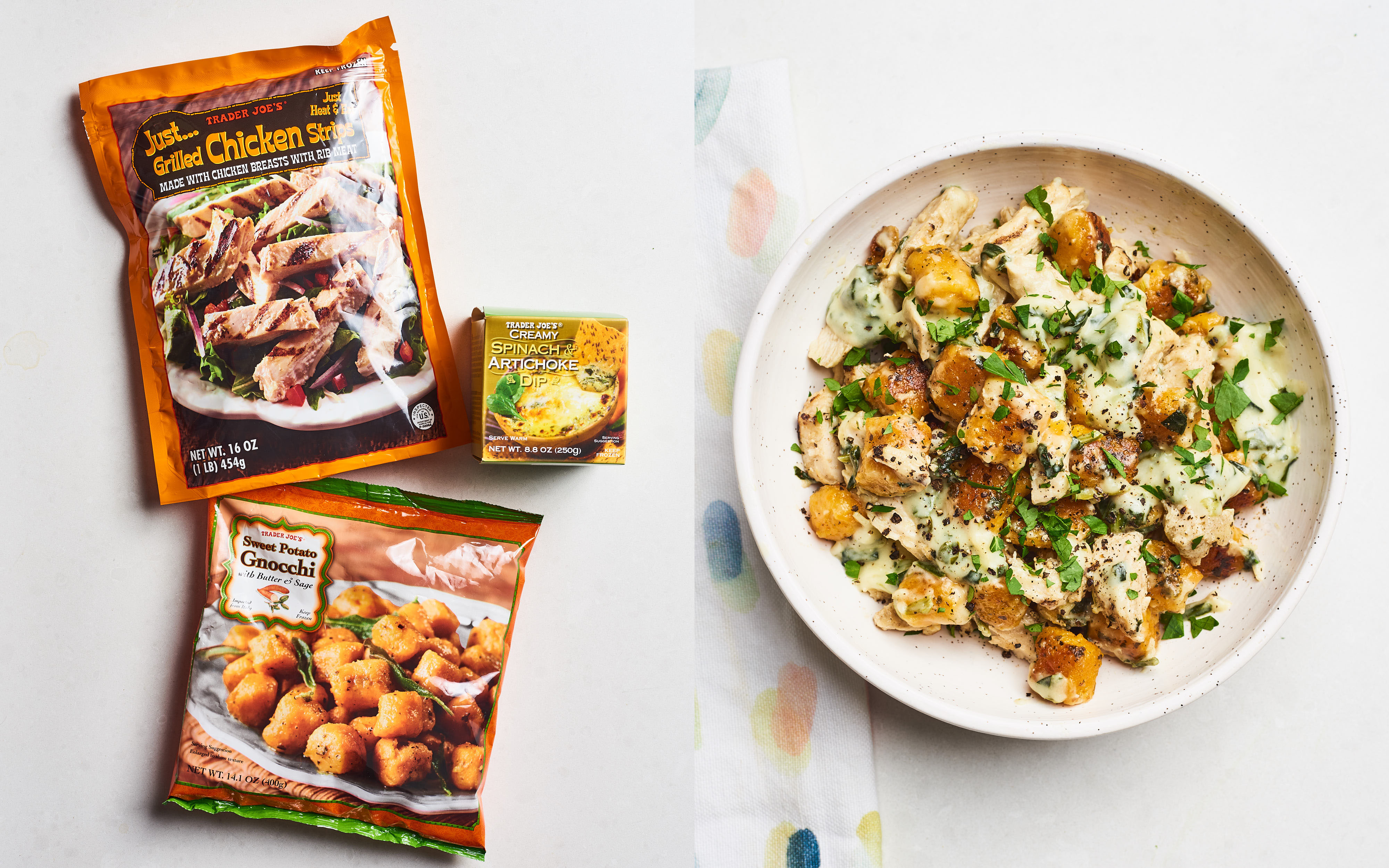 Defrost and warm 1 (8.8-ounce) box Creamy Spinach Artichoke Dip according to package instructions. Place 1 (12-ounce) bag Sweet Potato Gnocchi and 1 (16-ounce) bag of Just Grilled Chicken Strips in a large nonstick skillet. Add 1/4 cup water. Cook over medium heat until heated through and water has evaporated, 6 to 8 minutes. Add a drizzle of olive oil; sauté until gnocchi is lightly browned, 2 minutes. Remove from heat and toss with the dip. 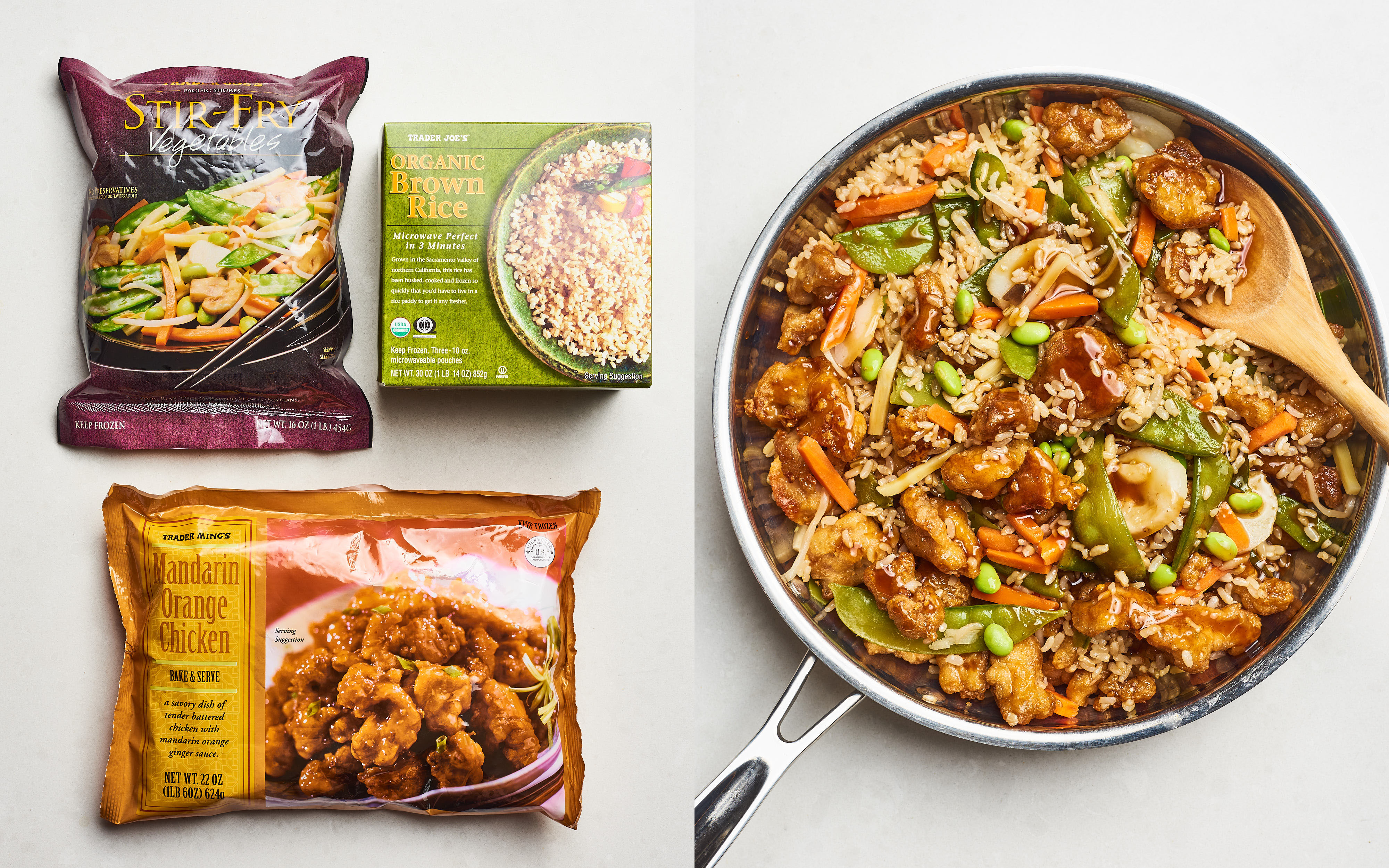 Defrost and warm sauce from 1 (22-ounce) bag Mandarin Orange Chicken according to package instructions. Heat a generous drizzle of olive oil in a large skillet over medium-high. Add the chicken, 1 (16-ounce) bag Stir-Fry Vegetables, and 2 (10-ounce) bags from a 30-ounce box of Organic Brown Rice. Stir-fry until warm and crisp. Remove from heat and toss with sauce. 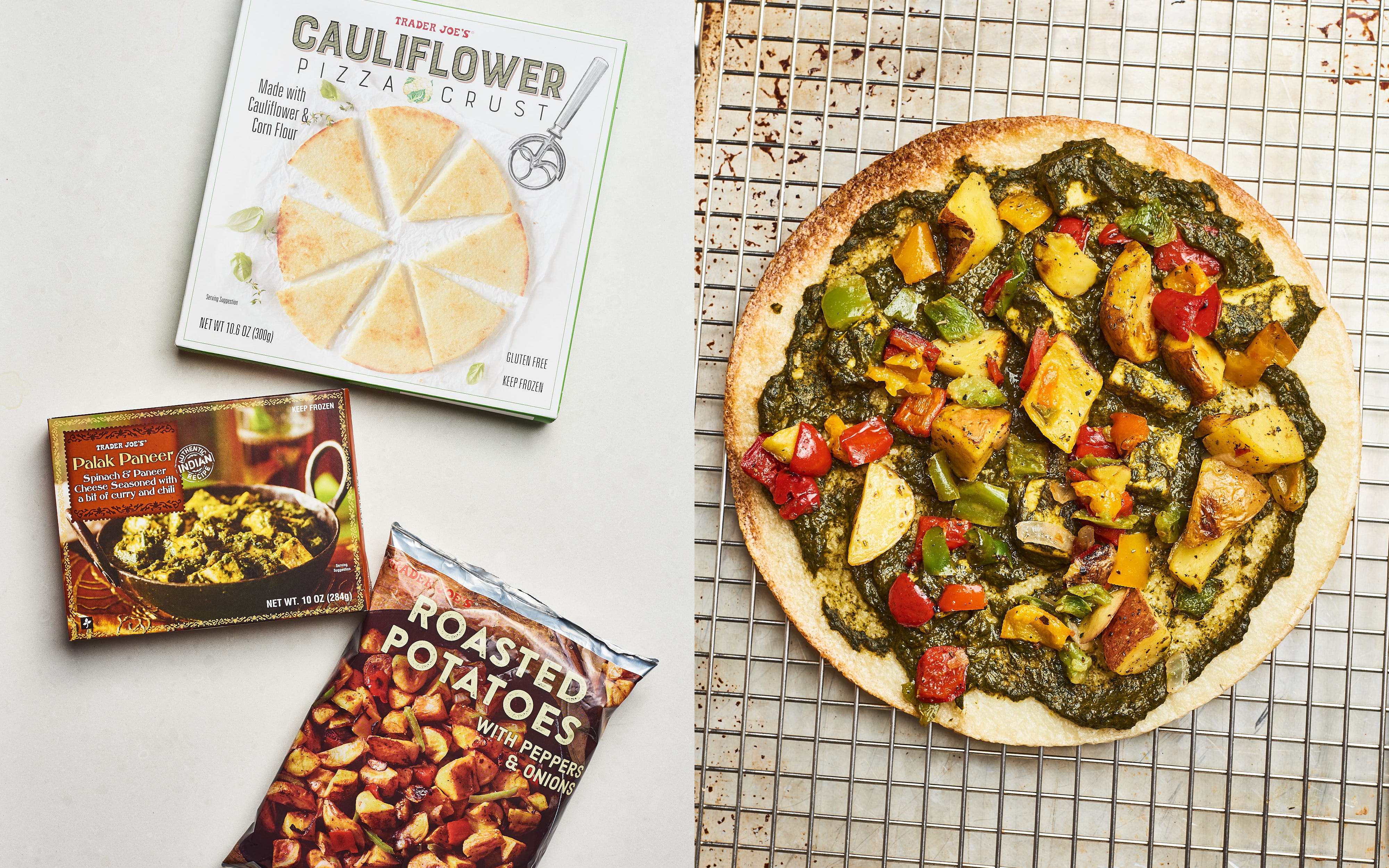 Defrost and warm 1 (10-ounce) box Palak Paneer according to package instructions. Place 1 (10.6-ounce) Cauliflower Pizza Crust on a baking sheet. Bake at 450°F until lightly golden and crisp, 5 to 10 minutes. Spread Palak Paneer on crust, top with a few handfuls from a 1 (24-ounce) bag Roasted Potatoes with Peppers & Onions or 1 (14-ounce) bag Fire-Roasted Bell Peppers & Onions. Broil for a few minutes until the vegetables are warmed through. 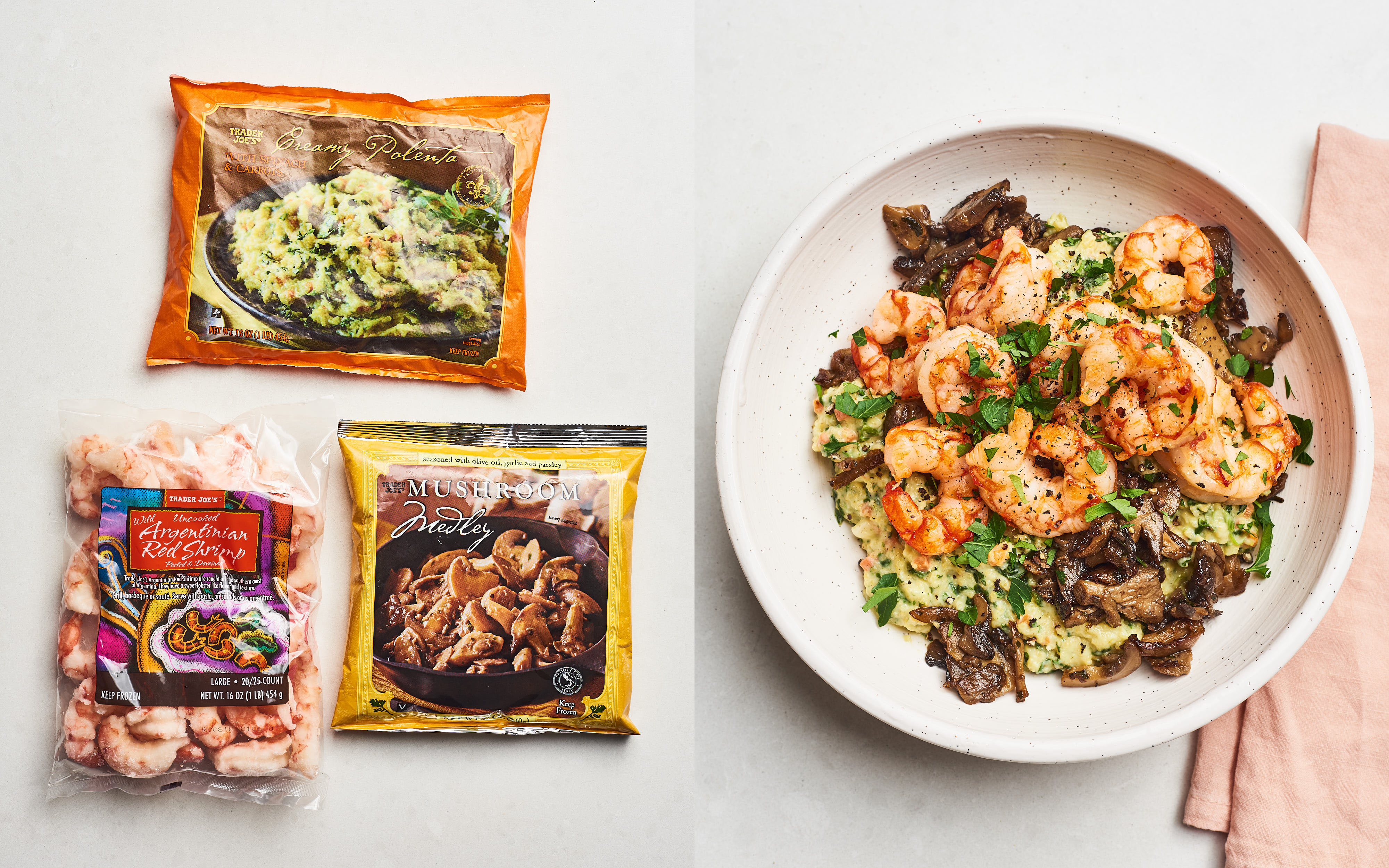 Place a rimmed baking sheet in the oven. Preheat to 425°F. In a large bowl, toss 1 (16-ounce) still-frozen bag Wild Uncooked Argentinian Red Shrimp and 1 (12-ounce) bag Mushroom Medley with a generous drizzle of olive oil; season with salt and pepper. Spread into an even layer on the hot baking sheet. Roast, tossing halfway, until shrimp are just cooked and mushrooms are warmed through, about 10 minutes. Meanwhile, defrost and warm 1 (16-ounce) bag Creamy Polenta with Spinach & Carrots according to package instructions. Serve shrimp and mushrooms over polenta.