When it’s quiet around here, it generally means one of two things: 1. I’ve been cooking a series of duds, or certainly nothing good enough to clear my throat into this microphone and sign the praises of. Or 2. We’re heading for another episode of Just What Has Deb Gotten Herself Into This Time (see: any Friendsgiving or wedding cake adventure). A couple weeks ago was the former; last week was resoundingly the latter. 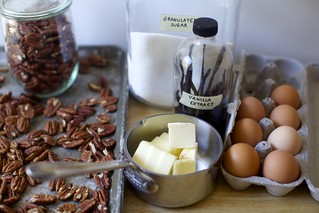 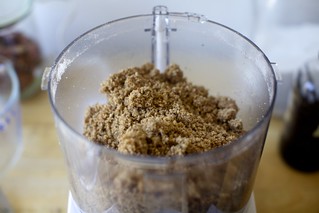 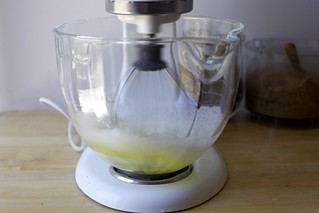 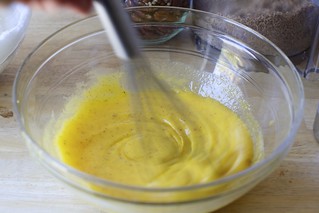 I took over first night Seder (a ceremonial dinner on the first two nights of Passover) duties last year, instituted Harry Potter haggadahs, and it was all going well until I got to planning this year’s meal (seemingly: writing potatoes, carrots, onions, eggs, almonds on a grocery list over and over again), decided we needed to shake up the guest list a little — really, I think I just miss my dad making bad jokes and trying to get us to stick even a tiny bit to the prescribed topic — and suddenly we were 17 (plus a waitlist; “only in the Smitten Kitchen…” a friend said), we definitely didn’t have this many chairs or table space, my fridge and freezer were bursting at the seams (the ice cube tray got evicted), and I haven’t even gotten into the part where a chef came over that morning to teach me a new dish that had nothing to do with Passover (but promise something fun is coming). The whole week was a heady mix of panic and delight. Someone is going to tell me it’s because I’m a Gemini, but truly the only thing that motivates me is being at the edge of a disaster, and that’s where the bulk of this month has vanished to. 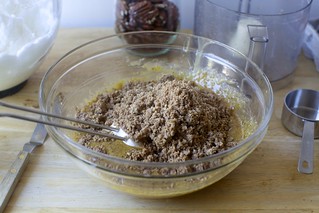 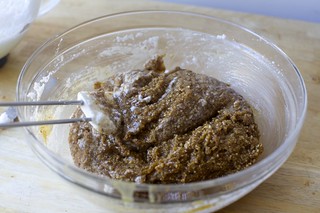 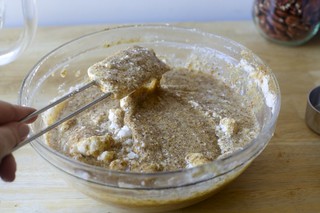 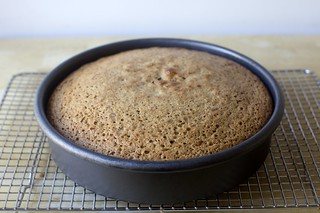 In the middle of this, I made a new, wonderful cake. There are a lot of nutty cakes on this site, macaroon tortes are among my favorite, but also this hazelnut brown butter number, this almond intensity, and this walnut cake, but most of them (macaroons aside) have the gluten- and Passover inconvenience of just a little bit of flour. So when someone pointed me to this almond cake from Joan Nathan (NYT), I liked many things about it: its utterly flourless; the ingredient list is short and straightforward (you’re not going to end up with 7 unused egg yolks, hallelujah) and a quick test run told me what we really want to know, which is that it’s spectacularly moist and tender and keeps really well. But if I had to choose between eating an almond and eating a toasted pecan, I would never choose the former. And if I had to choose between eating a cake with vegetable oil over one with browned butter, well, what kind of question is that even. I added some needed salt, used vanilla instead of almond and cardamom, and then I heaped the cake with whipped cream and all of the berries I could find and the result is perfect, toasty, creamy, fresh, and pretty and also approximately the only thing in my kitchen that was calm and running on schedule last week. 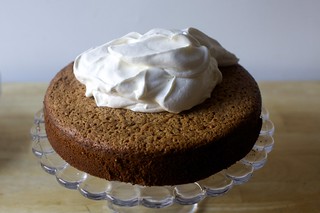 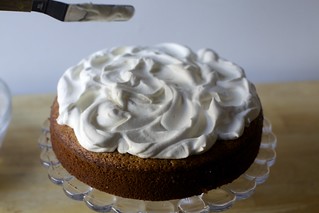 I hope you’ve had a wonderful holiday weekend, however you celebrate, and I’m super happy to be back to my regularly scheduled nonsense, when cooking food in less than 10-pound quantities feels like a vacation. 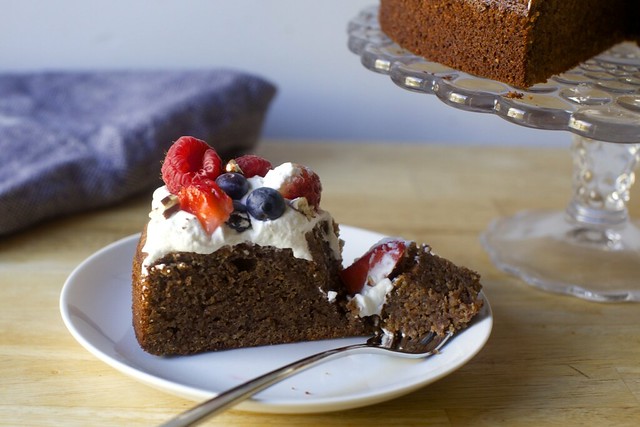 If you’re curious, this was roughly my Friday night Seder menu:
(If there’s no link, it’s not from an existing recipe, here or elsewhere.)
* Herb and Garlic Baked Camembert (my SIL made it from Smitten Kitchen Every Day)
* The Roumanian Steakhouse-Style Chopped Liver also in SKED, but I blended it and made a few tweaks, thus I owe you a new recipe. (Note: Wild Mushroom Pâté in the archives is a great vegetarian alternative)
* Charoset: Ashkenazi (my mom makes it) and Sephardic-style
* Gefilte Fish (my mother-in-law makes it)
* Matzo Ball Soup (psst, there’s a vegetarian one in SKED as well)
* Homemade horseradish
* Potato Kugel
* Harissa-Roasted Carrots
* Cold Asparagus Salad with a variation on this almond pesto, minus the parmesan
* Maya’s Sweet and Sour High Holiday Brisket (from The Smitten Kitchen Cookbook)
* Chocolate Caramel Crackers
* Mini-Pavlovas with Lemon Curd, Whipped Cream and Berries (reminiscent of the lemon meringue smash in SKED, but inspired by the look of these beauties, although mine were not)

And for the other side of the world:
Six Months Ago: Even More Perfect Apple Pie
1.5 Years Ago: Chocolate Olive Oil Cake
2.5 Years Ago: Indian-Spiced Cauliflower Soup and Skillet Baked Pasta with Five Cheeses
3.5 Years Ago: My Old-School Baked Ziti and Cannoli Pound Cake
4.5 Years Ago: Better Chocolate Babka and Fall-Toush Salad

I don’t have cup measurement for pecans or pecan meal because it’s just too inconsistent. (Every cup of nuts will weight something different depending on size and how many are broken and nut meal is even more inconsistent as you can just pack and pack it, the weight getting higher and higher.) I don’t want to mess this cake up for you with estimates. If you don’t have a scale, please simply buy 1 pound (455 grams) and do your best to estimate what removing 1/16 would look like (picture: 1/4, then 1/4 of that removed). Even if you’re a smidge off, it will still be more accurate than cups here.

If you’d like to make this cake dairy-free, just use 1/2 cup vegetable or another neutral oil.

Heat oven: To 350 degrees F. Oil or butter a 9-inch round pan and set aside. I lined mine with parchment for easier removal. While I don’t expect it to stick much if you don’t use parchment, I always think we’re better safe than sorry.

If you’re starting with whole or chopped pecans, toast them: Spread nuts in one layer on a sheet tray. Toast for 10 minutes, tossing once midway so that they cook evenly. They should smell nutty and appear one shade darker. Let them cool completely before using. You can hasten this along in the fridge or freezer.

Grind your pecans: Once they’re cool, grind the nuts with sugar and salt in a food processor or high-speed blender until finely chopped, but stop before they seem to glue together (i.e. become a nut butter). Set aside.

Brown your butter: In a medium saucepan, melt butter over medium heat. It will melt, then foam, then turn clear golden and finally start to turn brown and smell nutty. Stir occasionally, then frequently as it begins to take on color, scraping up any bits from the bottom as you do. Don’t take your eyes off the pot as while you may be impatient for it to start browning, the period between the time the butter begins to take on color and the point where it burns is often less than a minute. As soon as the butter takes on a nutty color and smell, remove from heat and pour into a large bowl to cool. You can hasten this along in the fridge or freezer, but keep an eye on it in the freezer especially, as you don’t want it solidified.

Beat egg whites: Until they form stiff peaks, but not beyond this point, when they might seem to have a dry and crumbly foam. Set them aside.

At last, assemble the cake batter: Add egg yolks and vanilla to the cooled browned butter in the large bowl and whisk until thoroughly combined. Stir in pecan-sugar-salt mixture, or, if you’re starting with pecan meal/flour, stir it in along with the granulated sugar and salt. The batter will be very thick.

Bake the cake: Until a toothpick inserted into the center comes out clean, about 35 to 40 minutes. Allow to cool for 10 minutes in the pan, then remove from the pan and let finish cooling on a rack.

To finish: I swirled mine with 1 cup of heavy cream plus 2 tablespoons granulated sugar and 1 teaspoon vanilla extract, softly whipped, and piled it with berries and a few chopped pecans. It could also be finished simply, with just a dusting of powdered sugar.

Do ahead: Cake keeps for 5 to 6 days in the fridge. Without cream, it doesn’t need to be refrigerated, but if you’d like to have it more than 3 days, I think it less prone to going bad if chilled.