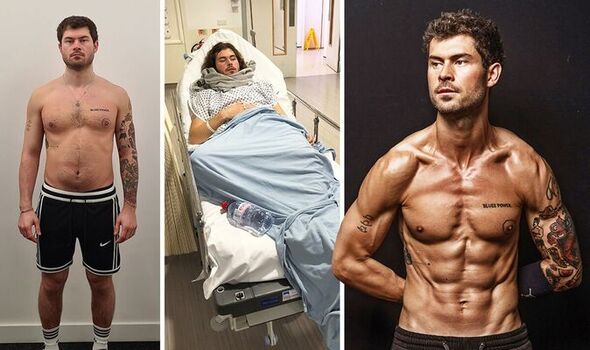 When Alexander Rebeiz-Nielsen was 25, he was rushed to hospital after he collapsed. In a critical condition, a parasitic infection and an abscess were discovered which meant he needed to have his gallbladder, and half of his liver, removed to save his life. Alex spent the next two months in hospital, where he lost 3.5 stone (22kg) as a result of his illness. He required a further four months of rehab to get back on his feet, which was made more difficult as he continued to require major abdominal surgery. In a bid to get his body back to peak health, he joined Ultimate Performance and embarked on a training programme where he has a six-pack most men would be envious of. Alex told Express.co.uk about his journey.

Speaking about his time in the hospital, Alex said: “I had recently become a father and needed to provide for my new family. I decided to start a new business, an art storage company [and] this entailed driving a van up and down the country, installing and collecting art.

“The long days, the stress and service station meals started chipping away at my overall health but, as so many of us do in our daily lives, I just decided to continue as I was providing for my family and making headway with my business.

“Each day food wise would normally be a Greggs steak bake for breakfast, McDonald’s or Tesco meal deal for lunch and then KFC for dinner with a few beers to wash it down. I thought nothing of it at the time but slowly my insides – in particular my liver and gallbladder – were becoming inflamed and started to come under immense strain,” he revealed.

“After months of neglecting my health, eventually I was rushed to hospital after collapsing at work – I had no idea what was happening to me, I was in excruciating pain. It felt like someone had stabbed me in the liver.

“After being given morphine to numb the pain, the hospital carried out a number of tests to determine what the root cause was. After ultrasounds, CT scans and MRIs, they eventually saw that my gallbladder was three times the size it should have been, and it was causing an abscess on my liver.

“Further investigations detected a parasite that was causing the inflammation and trying to shut down my liver.”

Alex continued: “Straight away I was put on intravenous antibiotics, the strongest ones they had, to reduce the inflammation and get the gallbladder back down to a reasonable size so that they could remove it safely.

“However, after two weeks of antibiotics, night sweats and consistent fevers the inflammation just wouldn’t go down. That’s when I had to have emergency surgery to have the gallbladder removed and the liver abscess drained or else the inflammation would spread and become life-threatening.

“The chances of a successful procedure were given as 50/50, I felt like I was flipping a coin for survival.”

He said: “When I came to after the operation the surgeon told me that all had gone to plan. My gallbladder had been removed safely but a third of my liver had also had to be removed.

“The abscess was described by my doctor as equivalent to the size of two tennis balls and filled with poisonous, black puss. A few weeks after surgery I had to undergo another procedure to drain excess bile that had collected where my gallbladder and part of my liver had been.

“After this, I began my recovery with a biliary drainage bag attached to me to collect the excess bile and blood that kept filling the empty cavity.

“At long last I was finally discharged after a two month stay in hospital. In total I had lost over 20kgs and came out the skinniest and weakest I’ve ever felt in my life.”

Alex originally weighed around 12.2st (78kg), but after “two months and several operations” he “left hospital at 9.1stone (58kg)”. However, this was not a healthy weight loss and Alex decided to focus on his fitness.

“Over the next few years I slowly put weight back on until hitting around 12.5 stone (80kg) before starting my transformation which then saw him drop to 11 stone (70kg).”

In terms of how Alex’s health was before he started training, Alex called it “inconsistent”. He explained: “I had tried a number of different diets and training programs but always found it hard to stick by them.”

So why did he choose Ultimate Performance? “I was led to UP by my brother who had been training there for a while and was seeing great results,” he explained. “I admit I was nervous at my first session but everyone in there was so friendly and welcoming that those emotions left me immediately after my first workout.”

As for what programme he followed, Alex shared his plan: “I trained five days resistance/weight training in the gym, focusing on a push, pull and legs split. Alongside this I would do one cardio session a week – something like an hour of boxing, swimming or running.”

In terms of diet, Alex said he “followed a mostly high protein diet with limited carbs (just to fuel my workouts) and low fat” when he was “cutting/transforming”.

“Now I have upped my carbs and fats to a more sustainable level for someone of my weight and size,” he added. “Happily I am maintaining my weight whilst continuing to get stronger in the gym.”

In terms of what his biggest challenge was, Alex said: “Staying positive while I was in the hospital [was hard]. It’s so easy to feel sorry for yourself and feel down in that situation.

“Such a huge factor in our overall health is mental but having the support of my family and friends helped me stay positive and cheer me up. Their visits and kindness really gave me that extra motivation to feel that I was going to make it through to the other side.”

He added: “Thankfully my health now has never been better. Looking after myself is now an integral part of my lifestyle and I love it.

“During my recovery period, I went back to studying as I wanted to understand in detail the mechanisms of the body – particularly something like this could happen to someone who, from the outside, looked and felt okay.

“After three years of intensive study, I became a qualified naturopathic nutritionist and personal trainer, becoming obsessed with different recovery and wellness therapies.

“This obsession has led me to start my own recovery and wellness facility [Re/Base] here in London, which will be operational in 2023. Re/Base will redefine what it means to look after the body from a wellness perspective, offering active and passive treatments that, alongside a balanced diet and training regime, will help people achieve both physical and mental wellbeing.”

He also had some advice for anyone else in a similar situation: “My main piece of advice would be to not neglect your health, if you feel like something is not right or have had consistent pain for a while – go and get it checked. Don’t wait until it’s too late.

“Also, we all think that we are invincible until something goes wrong. The lasting takeaway I have from my hospitalisation is that health is the most precious thing we have – never give it up lightly.”