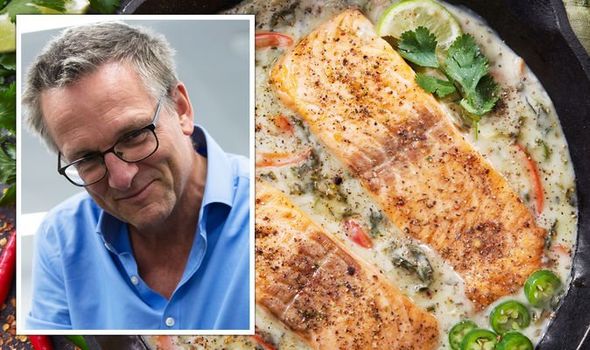 The health aficionado showed his fans salmon sizzling in a delicious sauce. The salmon is from Michael’s Fast 800 diet book.

Michael shared the video of himself about to enjoy the tasty looking meal, explaining he was on day four of a keto diet.

The keto diet is a low carb diet the expert has recommended for weight loss in his TV programmes.

Michael told his followers the diet was going well, claiming his blood sugar and blood pressure were down, as well as his “waist shrinking.”

He said: “Simmering away here, I have some salmon.

“What I have done is I’ve fried it up with some onions and a little bit of ginger.

“I put in two tablespoons of red Thai curry paste and some coconut milk.”

DON’T MISS
‘A core to be proud of’: Fitness guru’s exercise routine and diet tips [BELLY FAT]
‘Best way to sculpt your belly’: Two Pilates moves to ‘tone’ [EXERCISE]
How to use walking to blast belly fat and carve abs [RESULTS]

He said: “I’ve got some cauliflower rice, which is just some grated cauliflower.

“I’ll microwave it in a minute, and I’ve got some greens here as well.”

Michael claimed the meal takes only five minutes to make, saying: “I fried up the onion with the engineer. Then I added the coconut milk with the curry paste and the salmon.

Michael discussed cauliflower rice in a more detailed post on his social media.

He told his followers: “I have fallen in love with cauliflower rice.

“You simply grate some cauliflower and heat in microwave for one minute.

The health expert also claimed the vegetable alternative to rice is “great for soaking up sauce.”

Michael broke down the veggie equivalent to white rice, comparing one cup of each.

While cauliflower rice has 20 calories per cup compared to the 210 calories of white rice.