You may have seen Baked Alaska on menus at fancy restaurants, in vintage cookbooks, or on The Great British Baking Show. But what do you really know about this sweet treat? Here’s what you need to know about the hot-and-cold dessert:

What Is Baked Alaska?

Baked Alaska is a dessert consisting of cake, ice cream, and meringue. The seemingly logic defying dessert works because the air bubbles in “the meringue insulates the ice cream from the heat,” Libby O'Connell, author of The American Plate, told NPR in 2016.

Traditional methods of making Baked Alaska involve placing the dessert in an extremely hot oven for just a few minutes—long enough to firm and brown the meringue but not long enough to melt the ice cream—but newer recipes utilize a kitchen torch to toast the meringue.

This realization led to the invention of Omelette Norwegge, a predecessor of Baked Alaska that achieves its toastiness through broiling (the French dessert’s name is a nod to Norway’s icy climate).

Charles Ranhofer, a pastry chef at Delmonico's in New York City, concocted a dessert similar to Omelette Norwegge in1867 that he called "Alaska, Florida” because of the wildly different temperatures of its two main ingredients.

Ranhofer was famous for using his creations to reference timely topics (other recipes names alluded to President Grover Cleveland and actress Sarah Bernhardt), and this particular dessert was likely inspired by the United States’ recent purchase of Alaska.

The Frozen Florida, a dessert that emerged during the 1960s, is the inverse of Baked Alaska: hot liquor encased in a frozen meringue shell. This creation was actually the result of the newly invented microwave oven.

Nicholas Kurti, a Hungarian physicist who once lamented that “it is a sad reflection on our civilization that while we can and do measure the temperature in the atmosphere of Venus we do not know what goes on inside our soufflés,” developed the recipe to show that the microwave could produce desserts that are hot on the outside, yet cold on the inside.

How to Make Baked Alaska

Making a Baked Alaska is a multi-step, time-consuming process. That said, the payoff is huge.

You can make it in the oven, but we strongly recommend using a culinary torch to brown the meringue—even the most expert chefs could run into trouble trying to bake ice cream (this butane torch, which is just $19.99 on Amazon, has more than 800 5-star reviews). 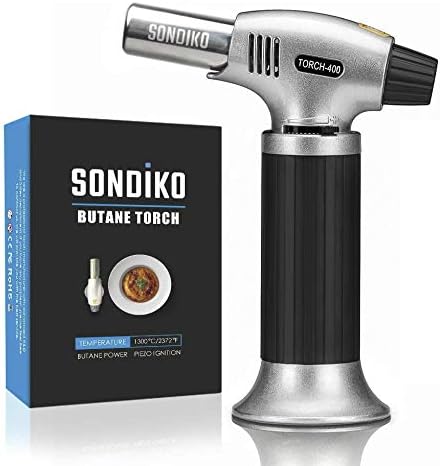 Before you mess with any of the other ingredients, you’ll want to first bake a layer of light genoise (of course, a store-bought cake mix will do the job in a pinch). Once your cake layer is baked and cooled, put it in the fridge to chill.

Using a stand mixer, beat the ice cream until it’s smooth and malleable. This ice cream, through a series of somewhat complex steps (explained in detail here), will eventually be sandwiched between the cake and a fluffy meringue to become Baked Alaska.