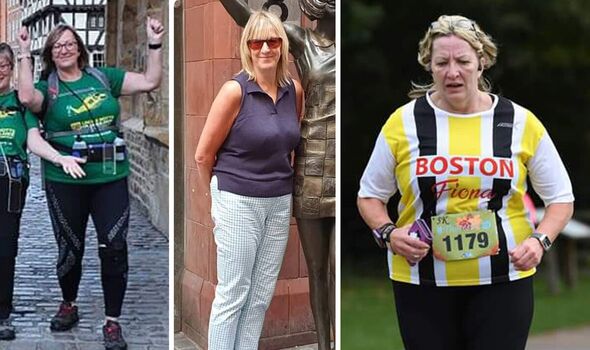 Fiona Wrisberg, 58, from Tattershall in Lincolnshire used to weigh 18 stone 3lb, and had tried “numerous weight loss” plans and “meal replacement shakes” before but was left “feeling hungry”. She spoke exclusively to Express.co.uk about how she lost five stone with the help of So Body Co.

As for why she wanted to slim down, Fiona said: “I looked at myself in the mirror on New Year’s Day and realised I needed to do something.

“I had a holiday booked for the following Christmas with my mum, and I wanted to look and feel good for that, too, as, as my mum is 83 it could potentially be my last holiday with her. It was also the first Christmas in 22 years I’d have Christmas Day with her.

“I also knew the weight loss would help with my joints. My overall aim was to lose three stone and keep the weight off by Christmas and I not only met that goal but exceeded it.”

Having tried to lose weight in the fast, Fiona had little faith in meal replacement shakes because she “didn’t notice any of the benefits they were supposed to produce”.

The shakes also contain a third of an adult woman’s recommended daily vitamins and minerals and are just 201 calories per serving.

Speaking about what appealed to her about a collagen-based meal replacement shake, Fiona explained: “I saw an advert on Facebook and the positive reviews So Body Co.’s CollaSlim had received on there. People seemed to be raving about it and they had a 90 day money back guarantee, so I felt like I didn’t have anything to lose by trying it and they must’ve been confident it worked, to offer that.

“They also had lots of nice flavours to choose from, including salted caramel and banana bread, meaning I wouldn’t always have to have the same flavour.

“I also liked not having to think about lunch or breakfast. And being the age I am, I was interested in the collagen aspect and the impact it would have on my hair and skin,” she added.

As for when she consumed the shakes, Fiona said: “I had two shakes per day in total, each with 500ml of almond milk. I had my first shake for breakfast at midday, a second shake at 3pm and then had a sensible evening meal.”

With some meal replacement diets, some certain foods and drinks can’t be consumed – for example alcohol, sugar or carbs. But this wasn’t the case for Fiona: “I just calorie counted and made sure I had sensible meals,” she said.

There are some concerns people put weight back on following a meal-replacement or shake diet, and Fiona shared her experience with this: “I still have one shake a day for lunch during the working week, but other than that I am sensible about my daily calorie intake.

“I have been using CollaSlim for 12 months and have managed to maintain my weight loss.”

“My nails are much stronger, my wrinkles have reduced, and I don’t have as much joint pain as I did previously. Everyone has noticed how different I am – for the better!”

Alongside the meal replacement shakes, Fiona also exercised. She shared the plan regime she followed: “I got 12 weeks exercise on prescription initially, and then joined the gym at the end of the 13 weeks. I mainly do resistance training at the gym, although I also do a lot of walking now too.”

As for how Fiona feels having lost so much weight, she revealed: “I’m happier, much more confident in my own skin and I’ve found so much confidence since losing weight that I’ve even started going to the gym. I feel mentally in the best place I have been in a long time.”

Fiona also had some advice for anyone else looking to lose weight: “Give it a go. You have nothing to lose. There is a 90 day money back guarantee if you don’t like the product.”

So Body Co.’s CollaSlim meal replacement shake (£33.99 for a pack containing 30 meals) is available to buy from Amazon and SoBody.co.